Spring break is one of the highlights of our year and also one of the most cost intensive parts of the year as well.  So far the team both teams have raised over a combined $1,000 to help subsidize our trip out west to California.  We have run junior tennis clinics for kids in the community as well as competitive tournaments for adults in the area who also want to support the team! 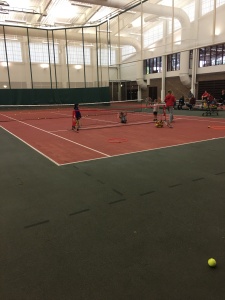 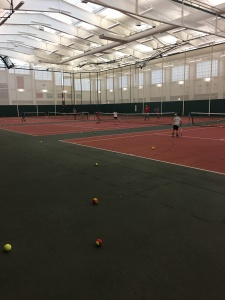 The spring season has been underway for the past two weeks and the Saints have been at it early and often preparing for our upcoming matches.  In the past two weeks we have had several hitting & fitness sessions, film sessions, as well as some community fundraising events to raise money for our trip to California.  We hold both clinics and a Pro-Am where players match up with community members and play some doubles pro-sets. Yesterday we had our annual “Scarlet v. Brown” intrasquad scrimmage. 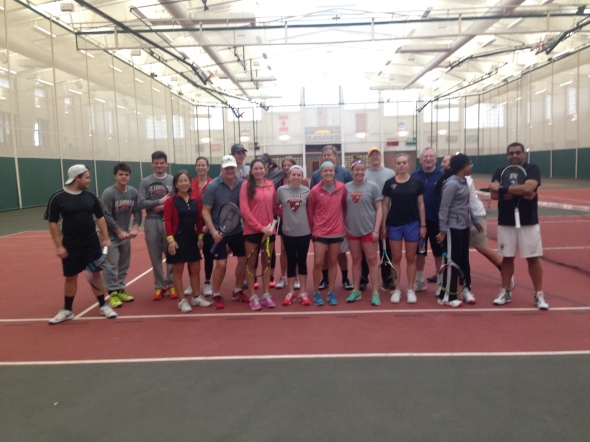 Seasons greetings from the Saints tennis team! The team recently completed final exams and headed home for winter break and some much needed relaxation 🙂

On December 11th, Coach Baird hosted the team for a holiday breakfast themed dinner and end of semester gathering. The team enjoyed a study break and yummy holiday treats!

We hope everyone has a wonderful and restful holiday, as we are getting excited for the 2016 spring season! Also, we are looking forward to welcoming back Hallie and Georgia back from abroad.

A snapshot from the 2015 team holiday ‘breakfast4dinner’ feast!

The ITA Rankings came out today and the Saints are #16 in the Northeast Region and will look to climb back in to the National Rankings this spring.  The team made it all the way to #36 last year nationally and was ranked as high as #12 regionally.  To see the full rankings, go here: http://www.itatennis.com/AwardsAndRankings/Rankings/2015-16_Oracle_ITA_Division_III_Women_s_Collegiate_Tennis_Rankings.htm

Despite the team going in to off-season mode with the end of the fall, the ladies are still able to get together each week to help fund-raise for our spring trip to California.  This past weekend we had a record 21 kids show up–most in costume.  Some were so committed to their costume they could barely see the ball–but no matter–they refused to change.

We are all going pro in something other than sports as the NCAA likes to say.  The award below is a testament to the team’s commitment to striving for excellence in the classroom.

The team had four players named Scholar-Athletes last year, which was the most for the program since the ITA started recognizing individual recipients in 2002, and surpassed that mark this season with half of the roster earning at least a 3.50 GPA. Honorees include seniors Olivia Arroyo, Elkie Vandenbeemt and Anna Young, junior Bridget Fleming, sophomore Hallie Young and first-year student Alexandra Bennett.

The ITA All-Academic Team award is open to any ITA program that has a cumulative team grade point average of 3.20 or above on a 4.00 scale.

Inevitably on every campus tour we give we tell students about how special it is to be a student-athlete at St. Lawrence.  We feel like we have some of the best resources academically and athletically in the country…but with not much data to back up that claim.  While I do believe that we have great academic and athletic facilities, I recognize my bias.  That’s why I was happy to see that a media outlet recently did a study and released rankings of the best Non-D1 Colleges for Student-Athletes.  St. Lawrence came in at #20: http://www.stack.com/2015/04/20/best-dii-diii-colleges-for-athletes/#.VYqyUAu9zNg.twitter

Academically, St. Lawrence offers incredible resources.  With  a wide array of majors and minors, as well as relatively progressive majors in fields like Statistics, Business, and Journalism, students can find what they want to study.  They will be challenged academically, but also given resources to succeed.  Professors, coaches, and faculty advisers are all there to make sure students don’t fall through the cracks.  Resources like the WORD Studio (Writing, Oral Presentations, Research, and Design) as well as the Quantitative Literacy Center are there for students looking for some guidance.  Peer tutors are also available for free.  The help is there.  All you have to do is ask.

And Athletically we are fortunate to have over 30 sports teams.  Campus is a very active place.  On the tennis team we use our 6 outdoor courts, 5 indoor courts, weight room & varsity weight room and track for our training.  We feel like we have many of the resources in place that we need to be successful–and it’s nice to see a non-biased outlet agree:-)

The team was recently recognized by the Intercollegiate Tennis Association (ITA) for their achievements this year recently when the final rankings for the year were released.  St. Lawrence came in at #16 in the northeast out of the 20 teams that the ITA ranked.  We went 15-7 this year, with 5 of those losses coming to nationally ranked teams.  It was a great year for the team as we received a national ranking at one point of 36.  As an added bonus, Elkie and Morgan were ranked #15th in the northeast region by the ITA.  The national champions (Williams), singles champion (Wesleyan), and doubles champion (Williams) all came out of the northeast.  We are looking forward to next year and the great competition our region has to offer.

Here is the link to the rankings: ITA Rankings

It’s been awhile since our last post as things have been crazy here on campus.  Things didn’t end up the way we had hoped with the Saints dropping two tough matches to Vassar College.  The ladies played their hearts out though and had plenty of competitive matches during the conference tournament match held @ Cornell University.  Despite getting pelted in the eye during her doubles match, Georgia rebounded for a straight set victory in singles.  Ultimately we lost 5-1, with the other three matches being undecided.

Next we shifted to our end-of-year awards BBQ which was held at Coach Kreitzer’s house.  Award recipients were Samantha Miller (Most Improved & The Bernie McKinnon Spirit Award), Anna Young (Most Valuable Teammate), Elkie Vandenbeemt (Most Valuable Player), and Hallie Young (Coach’s Award).  We also managed to retain all of the laundry loops and towels from every player which seems to be a record.

In honor of the end-of-year, we have a video that recaps a bunch of good memories from the start of our season many moons ago.  https://www.youtube.com/watch?v=gOxDsVvfG5Y Thank you to everyone who made this year possible–from players, to parents, coaches, teachers, staff, trainers, etc.  Here is to a great summer ahead!

This past Saturday marked the last home match of the year for the Lady Saints and sadly, the last home match ever for Sam, Elkie, Olivia, and Anna. All seniors finished on a high note though, as they went 11-0 as a class in their final two matches against SUNY New Paltz and Bard. Together they pushed the Saints to a 9-0 victory over New Paltz in the morning and an 8-1 victory over Bard in the afternoon. Saturday evening, Greg MC’ed the annual tennis banquet for players and parents. It was a star-studded event with appearances by former head coach Jeremy Freeman,  newly appointed Athletic Director, Bob Durocher, and families from five different states. It was a great night honoring the seniors who have dedicated so much to our program over the last four years. As a unit, they finished their careers with over 300 combined wins and helped St. Lawrence to achieve its first ever national ranking! Their work isn’t quite over yet though as the Saints gear up for a tough match with SUNY Geneseo tomorrow, followed by Vassar and TCNJ this weekend, and then Liberty Leagues the beginning of May.

To see the senior slideshow from the banquet, follow the link below!